The Olive Sector in Palestine

Olives are the largest agricultural crop in Palestine; they constitute more than 45% of the total agricultural area, and more than 85% of horticultural trees planted in Palestine. Additionally, (100) thousand families (more than 600 thousand people) work in this sector.

The importance of olives in Palestine stems from the special role it plays in protecting and preserving lands from settlements and confiscation, as well as establishing the rights of Palestinian citizens to their lands; since the olive sector provides food, income and job opportunities for a large percentage of citizens, especially the less fortunate.

This year, the area of olive plantations has reached about 907,043 acres in Palestine, while the number of olive trees was approximated at (13.6) million; of which (11) million trees are fruitful, and about (2.6) million are non-fruitful. It is noted that most of the olive area is planted with Al-Nabali Al-Baladi and Al-Suri varieties, in addition to a small area (7%) planted with Al-Nabali Al-Mohsen, and Al-Shamali (in the south) and some recent areas (K18).

The amount of production for this season is estimated at about 32,000 tons of oil; whereas, in light of the expected production and the economic situation for this year, the local consumption of oil in the Palestinian territories is estimated at approximately 16,000 tons. It is also expected that 7,000 tons of oil will be exported abroad (Arab and foreign countries); whereas most of said amount is intended to be delivered to Palestinian expatriates in Arab countries. Surplus oil will be stored with farmers.

Moreover, it is anticipated that all mills (310 olive mills) will operate during this season, noting that the number of operating mills during the last season was (308); (35) of which are in the Gaza Strip while the rest are in the West Bank. All of these presses are automatic except for (8) that are old or semi-automatic.

As a result of the apartheid wall, there are areas, estimated at about (40,000 acres) of olives isolated behind the wall, as well as in areas classified as Security Zones, whether behind the wall or near settlements. Consequently, many farmers are unable to reach their lands for purposes of care and harvest; whereas every year we suffer from the phenomenon of olive theft in hot areas and burning of fields, in addition to preventing farmers from accessing their own lands.

The olive sector is greatly affected by global climate change, and its effects were evident in the significant spread of some pests and diseases. Moreover, the change in the distribution of rain water and the cold hours in the spring had a direct impact on the delay in the date of olive ripening and fluctuation in production in the last 4 years.

Accordingly, the Ministry of Agriculture recommends the need to implement imperative interventions to preserve this crop and increase its production, including:

1. Pest and disease control.
2. Balanced annual pruning of trees.
3. Placing crescents and chains around the olive trees for the purpose of preserving every drop of water that falls thereon as well as for preventing them from drifting into the valleys.
4. Adding organic fertilizers annually to raise soil fertility and increase their ability to conserve water.
5. Supplementary irrigation of olive trees at a rate of 500 liters per tree during each season, in (3) batches.
6. Delay picking olives until the full maturity of the fruit. 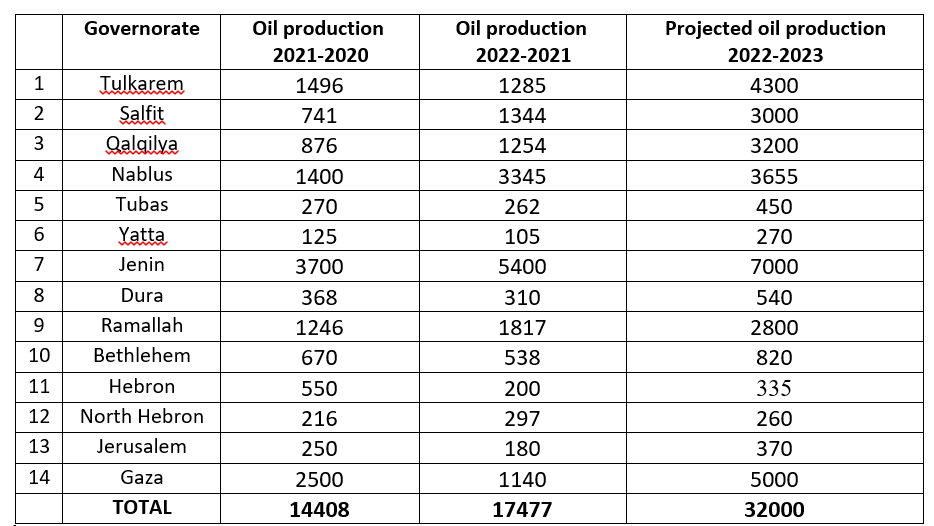